ABOUT THE CHARITY GUILD OF CATHOLIC WOMEN

The mission of the Charity Guild of Catholic Women is the sanctification of its members under the patronage of the Immaculate Heart of Mary through the practice of the spiritual and corporal works of mercy and the practice of charity by rendering assistance to children in need in the greater Houston area, regardless of race or creed.

The Star of David represents the Jewish heritage of all Christians since Christ was a Jewish rabbi.  The Sacred Heart of Jesus superimposed on the cross symbolizes Jesus’ supreme act of love for all mankind.  The Latin motto “Deus est caritas” translates “God is love.”  All symbols in the logo point to the love we strive to model, the reason we chose to include Charity in our name.  We believe that all we do, we do as acts of love to follow in Christ’s footsteps. 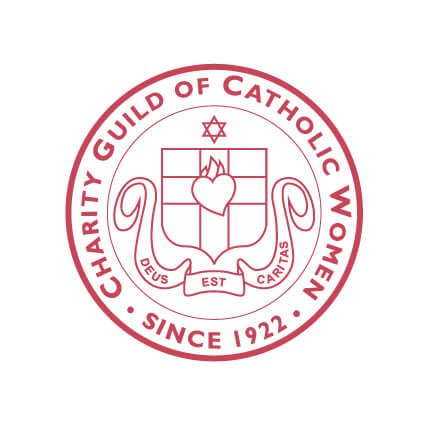 The forerunner of Charity Guild of Catholic Women began in 1922 at a gathering of 59 women of vision. With a collection of $1 from each, the group established a charity fund to help the growing population of disadvantaged children in Houston. Meanwhile, Monsignor George T. Walsh, pastor of The Church of the Annunciation, noticed the alarmingly high infant mortality rate among his parishioners. He asked the group of ladies for a donation to help establish Clinica Gratuita. They not only gave money; they began sewing layettes to distribute through the Mexican Free Clinic, now known as San José Clinic. The Sewing Committee is the oldest committee of the Guild and continues to sew layettes for infants.

The seminal group of Catholic women continued as a loosely established charitable organization until 1940 when they adopted a formal name and elected their first president. Still motivated by the troubling number of deprived children, the Guild sought a reliable income source to provide financial help. A consignment shop, operated by enthusiastic volunteer Guild members, was a blueprint for raising money.

Charity Guild Shop opened in 1952 in the 1600 block of Westheimer Road and later moved to a converted gas station on Woodhead Street. By 1960 the Guild achieved non-profit status, purchased property on Lovett Boulevard, and that year donated $9,000 to charities that aid children. Shop profit increased and by 1981 the Guild would commit to an annual $50,000 grant to San José Clinic and a $10,000 yearly grant to the unwed mothers’ program at St. Joseph Hospital, in addition to giving financial aid to other charities.

The 1990s were a time of expansion, resulting in a larger building with retail, office, and meeting space on Lovett Boulevard. In 2003, the Guild purchased additional property for increased parking and more floor space in the shop. Charity Guild of Catholic Women celebrated a red-letter day in 2004 with the announcement of $1 million in gross sales for the fiscal year. By 2013, gross sales doubled to $2 million.

With the advent of 2022, Charity Guild of Catholic Women will celebrate 100 years of service to the Houston community. The Guild looks to the future while honoring the past, from the needlework and monetary donations of 59 committed women in 1922 to the present time with 610 volunteers, many of whom work in the shop, and many who serve in one or more of the 25 committees available to members. The sanctification of members and assisting children in need remains our mission.